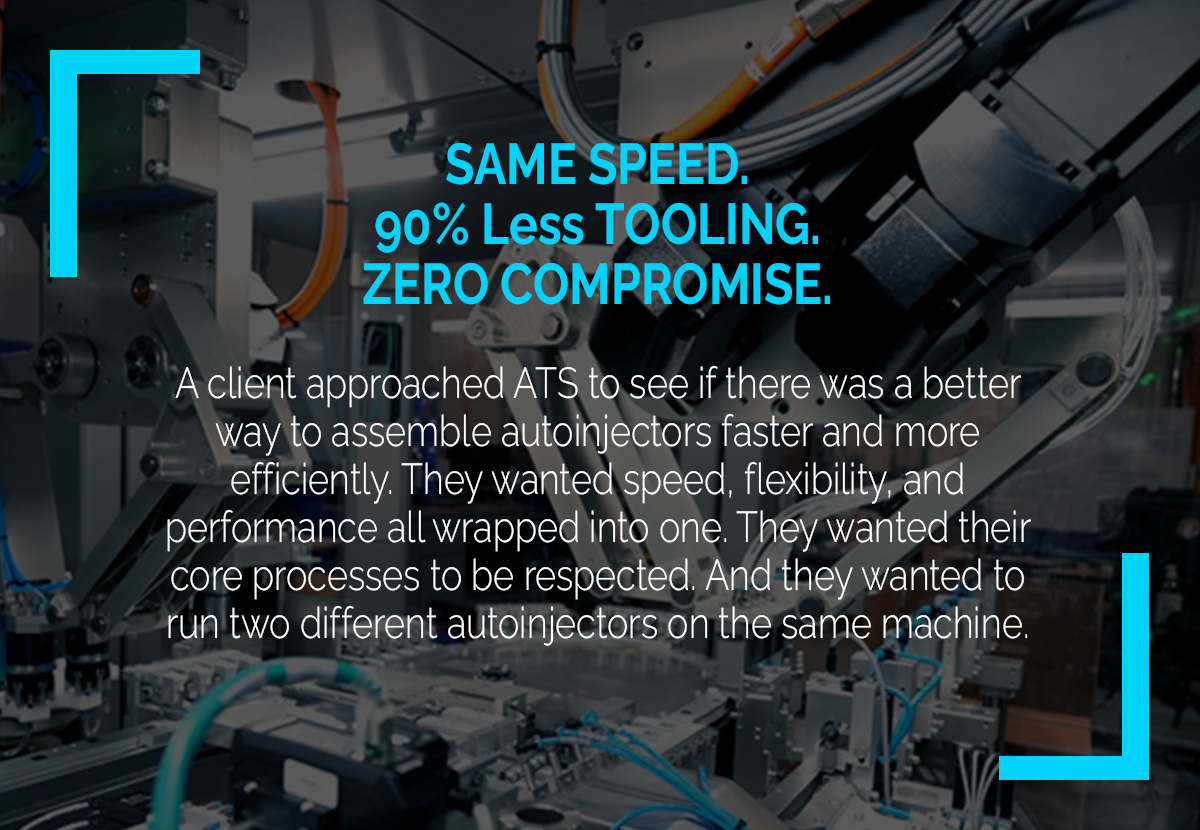 A common assumption about assembly technology is that for it to go fast with minimal tooling, core processes must be altered, sped up, or be rendered with more force.

Symphoni—a standardized, modular system that is both fast and flexible—was up to the task. Not only did Symphoni meet all the client’s objectives without compromising critical processes, but it also reduced floor space by over 50% and eliminated 90% of tooling needs.

Agile yet fast. Efficient yet high-performance. Precise yet cost-effective. This case study explains why Symphoni represents the future of factory automation.

This was exactly what a multinational pharmaceutical firm believed about Symphoni when they were looking for an innovative high-speed assembly solution for their new autoinjector lines. We explained that we would honor their validated gentle insertion process but would do it faster and with significantly fewer tools. In other words, we would demonstrate that our standardized, pre-engineered system, designed to adapt to different processes, would beat a machine that was custom-built in flexibility, precision, and footprint.

The client thought we were missing something; that we would apply too much force on the product, or alter the core process, or not be able to monitor every critical stage of the assembly process. So, we invited them to run a process characterization test on a Symphoni Demo cell at our Cambridge, Ontario Innovation Center.

Our engineers designed the touch tooling and mapped out the sequence of operations on Symphoni simulation tool. The tooling and operational sequence were then integrated into a Symphoni demo machine.

Even though this was the first time they ever saw a physical Symphoni machine, after watching our engineers run a couple of trials, our clients were comfortable enough to do the test runs themselves.

We demonstrated that Symphoni could reduce- the client’s current assembly tooling from 20-UP to 4-UP for the insertion process. We further eliminated two quality control stations, each with 10-UP, by doing the quality inspection on the Symphoni system using the same 4 assembly tools. Symphoni achieved the same insertion rate of 320 PPM plus pre and post inspection with 4-UP versus 40-UP on the current system. 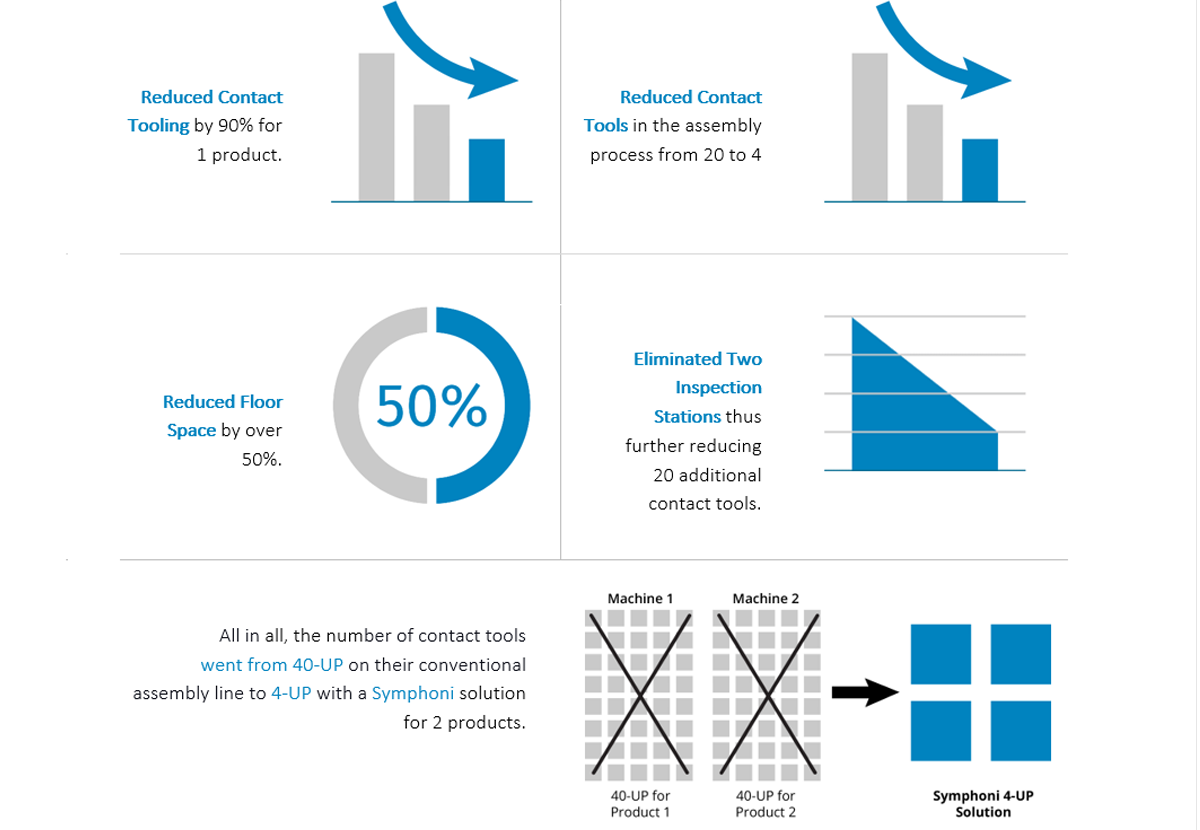 The client’s only remaining question was: ‘How does Symphoni achieve such performance at assembling autoinjectors while retaining quality and flexibility?’

The answer is multifaceted—there is no single element, no silver bullet, that allows Symphoni to do what it does. We started from first principles and devised a machine that zeroes in on precisely what is necessary while ruthlessly cutting out what is not.

The overarching methodology of Symphoni is its recipe for success. It consists, in part, of the following:

Symphoni delivered a revolutionary solution for our client that they had to see to believe.

The following slides demonstrate what our team showed to the client to mitigate their risks and address their concerns about adopting a transformative technology that delivers speed and versatility without sacrificing performance and quality of a validated assembly process.

Our client was a medical device manufacturer that already had high volume assembly lines operating at 320 PPM for their autoinjector products. Their conventional, custom-built machines were very large, with many tools using 20-up in multiple stations. Each line also had pre and post-quality inspection stations. Each quality station had 10 tooling.

A Combined Solution for 2 devices.

Is there a potential to reduce tooling? 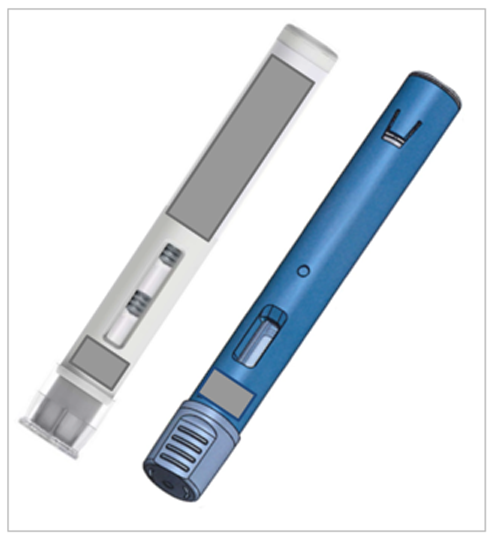 Their initial request for our Symphoni Innovation Team was to reduce the number of tools and achieve the same rate. Additionally, as cleanroom floorspace is at a high premium, they wanted to reduce the machine’s footprint. When we told them that Symphoni could achieve all these targets, as well as provide resiliency and flexibility for future products and processes, they wanted to see it for themselves.

SLIDE 2: VIDEO OF THE DEMO TEST

Our engineering team engaged with the client to design the tooling for the pallet, the grippers, the RSM Arm, and the insertion tools to ensure that all the challenges identified in production were being addressed.
We used a module from a demo machine to set-up for a day test runs at full rate.

Sequences of Operation for Demo Run:

When you watch the video —which was taken when we ran the demo for the client—it looks fast. In-person, it appears even faster. This blur of motion gives viewers the false assumption that the system is violent.

However, it is important to slow down to appreciate Symphoni’s calm motions, so we installed a high-speed camera to capture the insertion that is otherwise difficult to see when the machine operates at 320 PPM. As you can see in the grey video from the high-speed camera, Symphoni performed the same core work at the same speeds and force as the existing equipment, while being gentle on the components.

This graph is an overlay of 50 runs that we did on the demo unit. These runs showed that Symphoni does the same work at the same rate, respecting critical processes, but using fewer tools. It is very accessible and able to identify in the single station failure criteria. With their existing line, the client had extra stations to do what Symphoni can achieve with one machine. 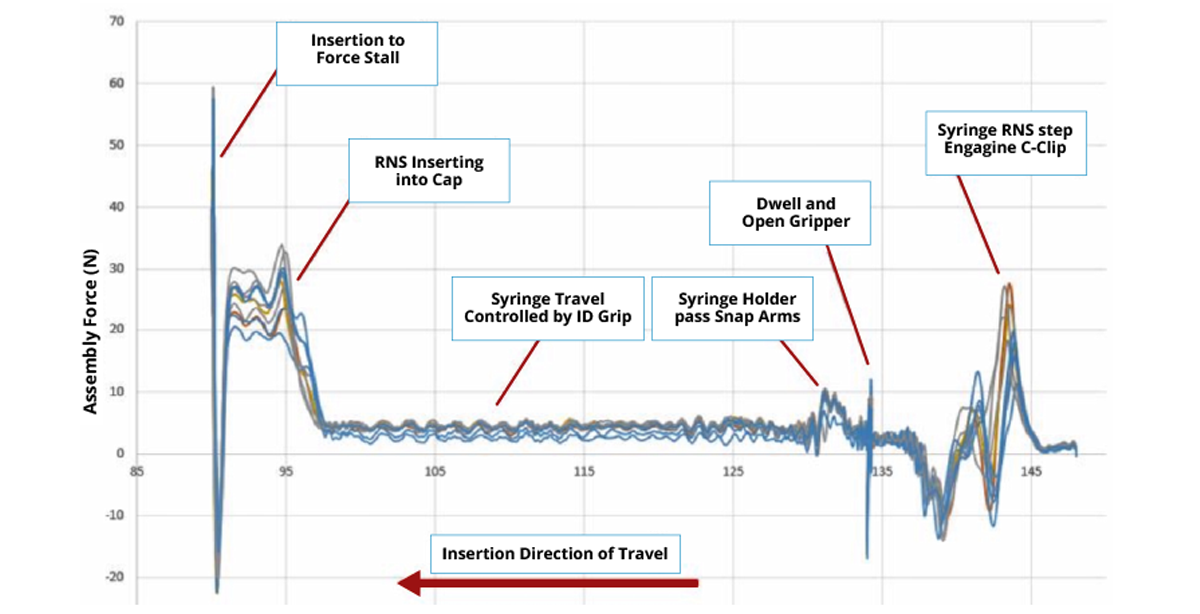 From the data overlayed, it is evident that there is minimal variation from one run to the next. We could clearly identify and monitor each of the interactions that the pre-filled syringes have with the injector body.

The demo showcases and highlights Symphoni most important feature: efficiency. We adopt the lean methodology in our technology and use value stream mapping at the millisecond level to allow the system to go as slow as it needs for critical processes, and as fast as it can for non-value-added processes.

Furthermore, the next four (4) images capture and clearly identify the failure mode waveforms. 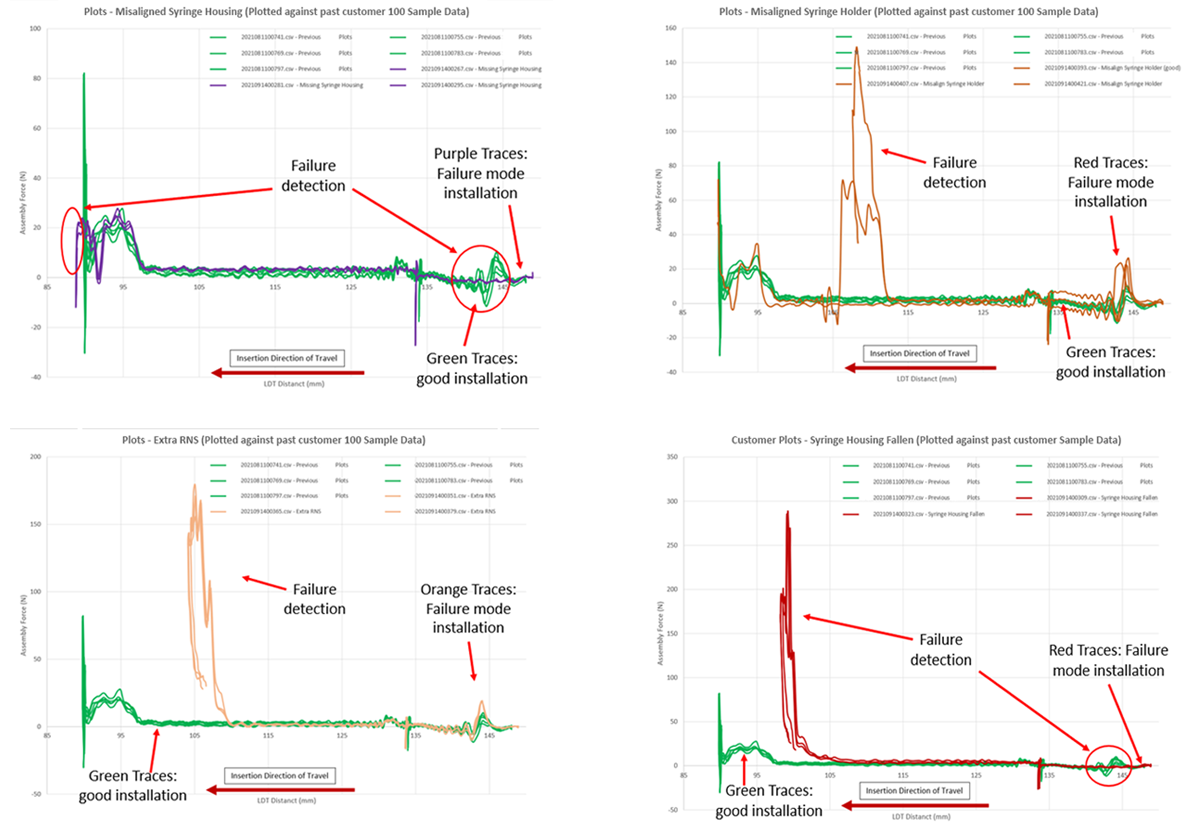 The core principle of Symphoni is efficiency. We do not change process times or procedures associated with any critical operation. We go slow where we must. 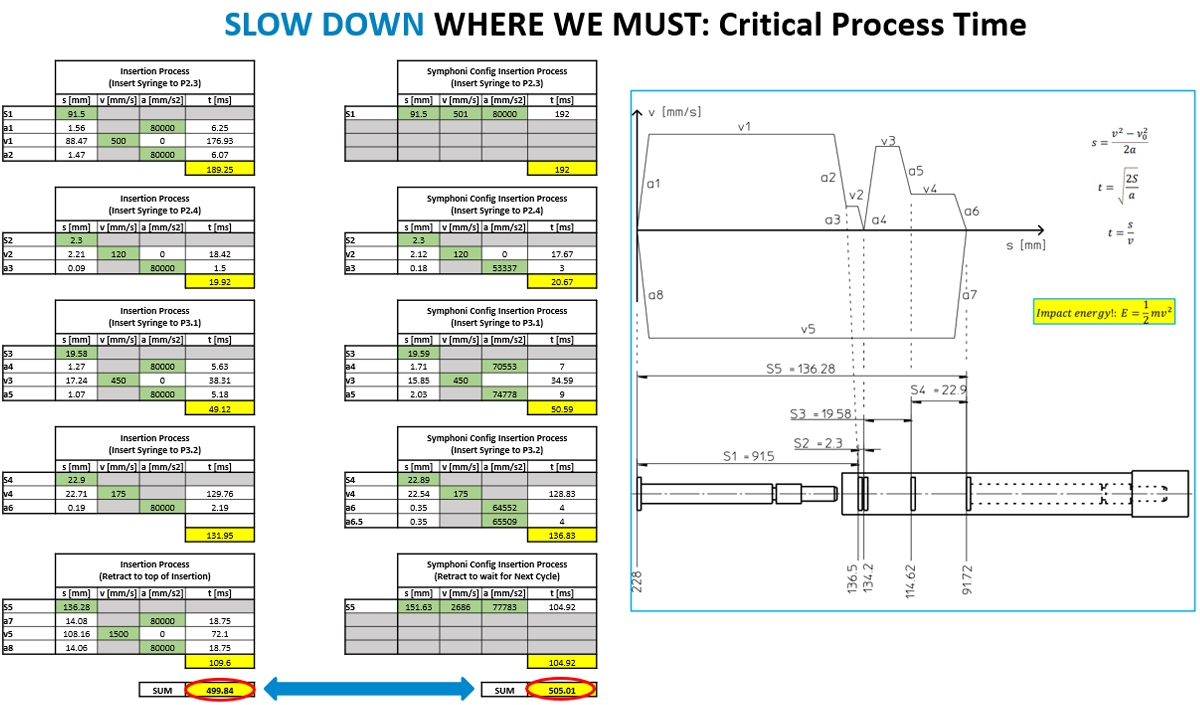 When people witness Symphoni in real time, it’s a blur. The power of Symphoni only becomes clear when we break the processes down into its constituent parts.

In this project, there were five critical process stages where the prefilled syringe is inserted into the autoinjector body. The speed at which Symphoni operates these stages is virtually the same as conventional equipment at 500 milliseconds. We maintain the same speed, same time, same accelerations, same limits on velocity, and the same force limits. Furthermore, we monitor force and distance to identify any quality failures, just as with a conventional assembly line.

While we go slow where we must to ensure quality, we go fast where we can, to increase productivity. We save time in the preparation processes, such as when parts move from one station to the next. 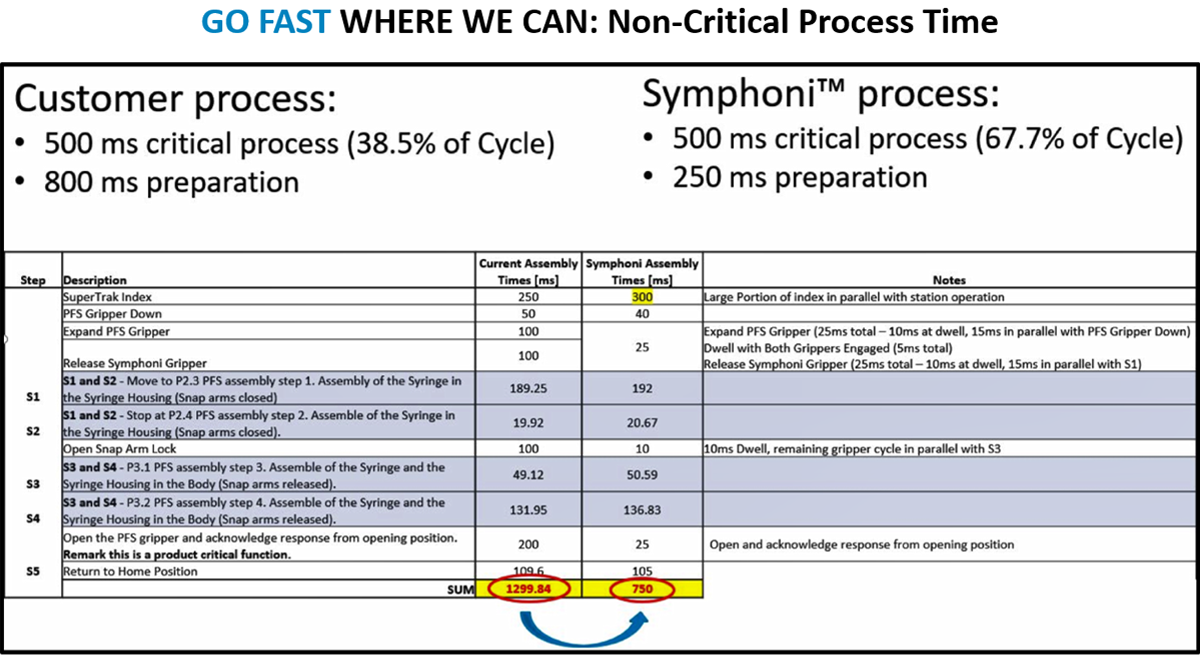 Symphoni’s efficient methodology preserved valuable time in the non-valuable processes. While taking the same 500 milliseconds to do the critical process work, we got rid of 550 milliseconds of wasted motion. This changes the ratio to 67.7% of total cycle time devoted to critical motion. We call the remaining 32.3% “non-value-added” processes. This flipped ratio is why Symphoni can go fast and still be gentle on parts. The synchronous motions are calm to allow the machine to take all the time it needs for the important processes like syringe insertions and ultrasonic welding.

The results of Symphoni when benchmarked against the client’s existing conventional equipment is compelling.

The outcomes were clear, powerful, and—from the client’s perspective—groundbreaking. Symphoni dramatically reduced footprint by more than 50%, reduced tooling by over 90% for two products and increased quality without sacrificing performance. The client’s goal to run two different autoinjectors on the same machine was achieved.

Symphoni, with its high speed and high flexibility, provides the lowest total cost of ownership. It is a depreciable asset that can be retooled or reconfigured for different products and processes, thus adding flexibility to the business.